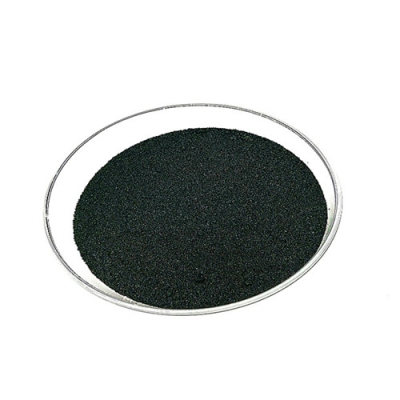 Item No.: TR-Mn3C Manganese carbide is a stable compound formed by manganese and carbon. The chemical formula is Mn3C, the melting point is about 1520°C, and the density is 6.89g/cm3.Particle Size: -325meshPurity: 99%
Manganese Carbide Mn3C Powder CAS 12121-90-3 introduce:

About Manganese Carbide Mn3C Powder:
Manganese carbide is a stable compound formed by manganese and carbon. The molecular formula is Mn3C, the melting point is about 1520°C, and the density is 6.89g/cm3. Manganese carbide burns rapidly in oxygen and decomposes in water to produce manganese hydroxide, methane and hydrogen. It is easy to react with acid and be decomposed, easily react with chlorine and fluorine, and decompose into manganese and carbon at high temperatures.
The heat of the formation of manganese carbide is △fHm (298K)=-(15.06±12.55)kJ/mol. When smelting high-carbon ferromanganese or manganese-silicon alloy in a blast furnace or electric furnace, what is obtained is not pure manganese or manganese silicide, but manganese carbide. Therefore, the heat absorbed by the reaction is less than that of reduction to metallic manganese or manganese silicide. The reaction starts with the temperature is low. Therefore, high carbon ferromanganese contains more carbon. Feel free to send an inquiry to get the latest price if you would like to buy Manganese Carbide Mn3C Powder in bulk.

Physicochemical properties of Mn3C: soft crystalline solid or bright needle crystal with a relative density of 6.89. It is insoluble in concentrated sulfuric acid and nitric acid, but can be decomposed by water or dilute acid to produce manganese hydroxide, hydrogen and hydrocarbons. It burns rapidly in oxygen and is easy to react with fluorine and chlorine.

How is Manganese Carbide Mn3C Powder produced?
A method for preparing manganese carbide by gas-based reduction of manganese oxide. After mixing manganese oxide, binder and water, agglomerate and dry, and the resulting dry block is placed in a mixed atmosphere containing H2, CH4, CO and N2, Calcined at a temperature of 1100 ~ 1300 ℃, that is, manganese carbide products. The specific steps are as follows: the mass percentage of -325 mesh size is 90% analytically pure manganese dioxide and trimanganese tetroxide, mixed with 0.5% CMC and 7.5% moisture, then pelletized and then dried. The dried sample is calcined in an atmosphere of 10% CH4, 30% H2, 10% CO, and 50% N2 at a calcination temperature of 1150°C and a calcination time of 120min, and then in an N2 atmosphere. Cooled to room temperature, the calcined product obtained is the manganese carbide product, and the conversion rate of manganese dioxide is 95%.

Applications of Manganese Carbide Mn3C Powder:
Manganese carbide Mn3C powder is used in hard coatings, targets, welding materials, spray tools, steelmaking industry, aerospace and other fields.
As the grain refiner of cermet and tungsten carbide, manganese carbide can significantly improve the properties of the alloy.
Manganese tetroxide is one of the important raw materials for the production of manganese-zinc ferrite soft magnetic materials in the electronics industry, and it is widely used.
Manganese carbide may be used to prepare a transformer oil. The process is simple and suitable for large-scale production, and it can prolong the replacement of transformer oil and reduce potential safety hazards.