High-entropy alloys (High-entropy alloys) referred to as HEA, is an alloy formed by five or more kinds of equal or approximately equal amounts of metals. Since high-entropy alloys may have many ideal properties, they have received considerable attention in materials science and engineering. In the past, the primary metal components in alloys may be only one or two. For example, it will be based on iron, and then add some trace elements to improve its characteristics, so the result is an iron-based alloy. In the past concept, if more metals are added to the alloy, the material will be embrittled, but the high-entropy fusion is different from the previous alloys. Many minerals will not be embrittled. It is new material. 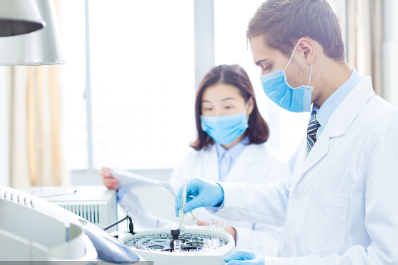 1) The first generation of high-entropy composites: composed of 5 or more alloying elements, the compositional element content ratio is an equal atomic ratio, and the phase structure is a single-phase complex alloy;

2) The second-generation high-entropy fusion: It is composed of 4 or more alloying elements. The content ratio of the constituent parts can be non-equiatomic, and the phase structure is a two-phase or multi-phase complex solid solution alloy;

Materials are often prone to low-temperature brittleness. Composite materials such as high-entropy alloys exhibit unique mechanical properties at low temperatures due to the combined action of slip and twinning mechanisms. When multiple deformation mechanisms coexist, it is of considerable significance to find out how the various deformation mechanisms compete or cooperate. The CrMnFeCoNi alloy studied in this paper has a strength of 2.5GPa and a plasticity of 62% at a low temperature of 15K. The study found that stacking faults play a crucial role in bridging dislocation slippage and sawtooth. At low temperatures, various competitive mechanisms can work together to produce high strength and high ductility materials.

The City University of Hong Kong team used in-situ neutron diffraction to discover the interaction of multiple deformation mechanisms in the high-entropy alloy at ultra-low temperature, firstly dislocation slip, then stacking faults and twins, and finally transformed into zigzag deformation into Non-uniform deformation.

High-entropy alloys are an exciting class of structural materials composed of a variety of primary elements. They have excellent strength, ductile combination, fracture toughness, corrosion resistance, and hydrogen embrittlement. They also have excellent stability against radiation damage and are therefore considered potential materials for advanced reactor applications. Despite the complex chemical process, high-entropy alloys can form single-phase robust solutions through a very simple lattice. For example, CrMnFeCoNi, also known as Cantor alloy, has a face-centered cubic (fcc) structure.

Here, the researchers conducted in-situ neutron diffraction measurements on three representative fcc high-entropy alloys, namely CrMnFeCoNi, CrFeCoNi, and CrCoNi. They all show a multi-stage deformation process. Quantitative analysis of experimental data shows that stacking faults play a crucial role in bridging dislocation slippage and sawtooth. If there is no stacking fault, the alloy will slide directly from the dislocation to the diagonal. Like other low-temperature alloys, it will fail early, and the flexibility will decrease. The CrMnFeCoNi alloy studied in this paper has a strength of about 2.5GPa and plasticity of about 62% at a low temperature of 15K! 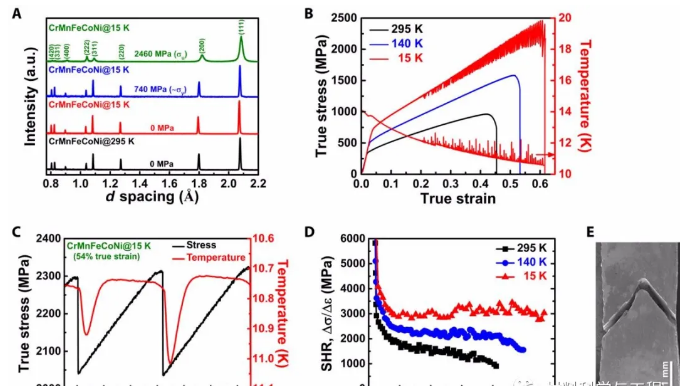 Figure 2 Evolution of lattice strain and texture during deformation 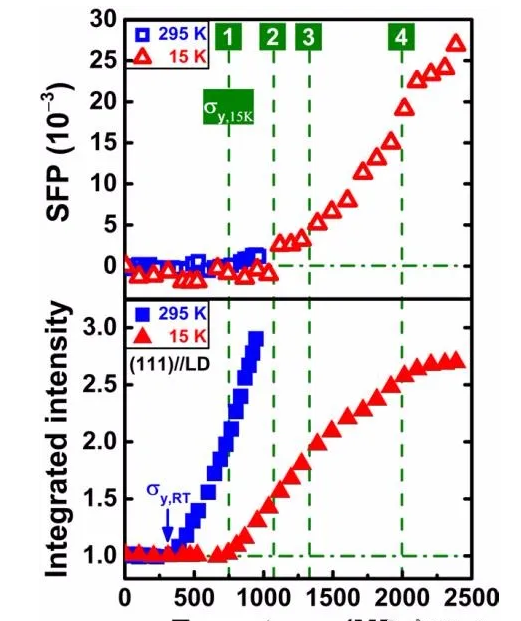 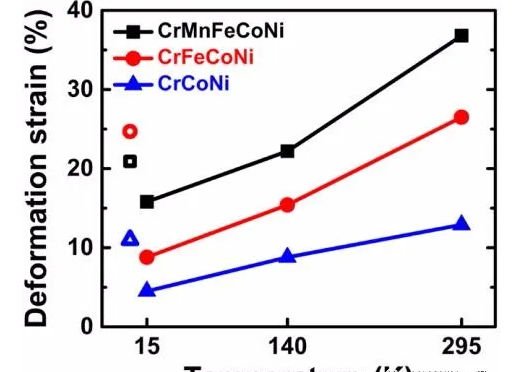 This shows that by studying the deformation behavior of high-entropy alloys at ultra-low temperatures, the interaction and competition between different deformation mechanisms are clarified. Research shows that the unique combination of complex chemical composition and simple crystal structure may be the key to the design of new materials for low-temperature applications. In low-temperature applications, various competitive mechanisms can work together to produce high-strength and high-ductility materials.